Tracing His Hand . . . Celebrating His Faithfulness

Sola Gratia Musicians, Inc. was founded by two moms who desired to provide choral experience for their children and other home-educated students. They solicited advice from the director of the Princeton Area Homeschool Choir who kindly “held their hands” as they considered the many details that would have to come together in order to form a choral organization. As discussions were initiated with a prospective Artistic Director, a loyal base of homeschool families was asked to pray for the new venture. The Lord faithfully brought all details together in a matter of months. Karen Burgman agreed to come on board as SGM’s Artistic Director. When a director, accompanist, and Steering Committee were all in place, plans were made to organize for SGM’s first choral season.

In choosing a name, it was decided that “Sola Gratia Musicians” was an apt fit. The Latin term “sola gratia” (SO-lah GRAH-tsee-ah) means “by grace alone.” It reflected the organizers’ profound conviction that if the choral training and performances were to have excellence and be God-glorifying, it would do so by His grace alone. 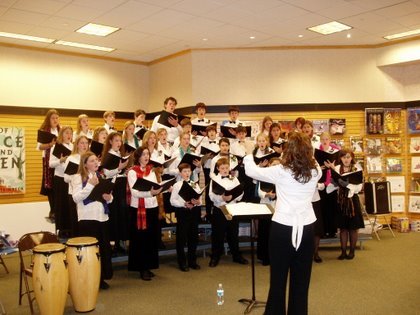 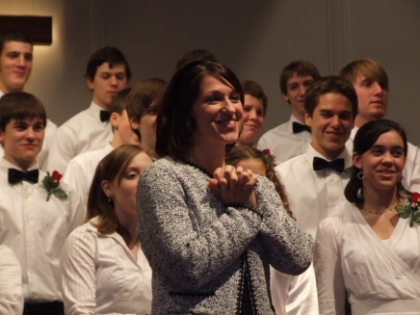 Prospective choristers and their families were invited to meet the Artistic Director, and workshops were held to introduce students to Eurhythmics — a study in which bodily movements are used to represent musical rhythms. Bethany Bible Fellowship Church in Hatfield, PA, graciously agreed to host these introductory sessions. Bethany became the “home base” for SGM’s weekly rehearsals for 14 years. Initially, SGM offered a Concert Choir (later renamed Laudate Choir), Chamber Choir and a Eurhythmics class. As the organization grew, a Youth Choir (later renamed Cantabile Choir) was added, then a Junior Choir (later renamed Jubilate Choir). Gayle Tuttle came on board to co-direct these two younger choirs. She also taught MusicFUNdamentals classes for young children, which ran concurrently with weekly choir rehearsals. SGM incorporated in 2012, and a Board of Directors was established. Soon after, the Board completed the process for acquiring 501(c)(3) non-profit status. In 2014, a Prima Choir for 5-7 year-olds was introduced, and for the first time three advanced ensembles were offered: men’s and women’s chamber choirs, and a Madrigals ensemble.

SGM has grown from its first enrollment of 23 choristers to a high of 115. Over the years our students have had amazing opportunities to work with modern composers Morten Lauridsen, Rollo Dilworth and Craig Courtney.

They have enjoyed a choral exchange with the Princeton Area Homeschool Choir, attending Cairn University Choral Festivals, singing back-up for Adam Jacobs (who starred in Aladdin on Broadway) at a local Amazing Grace, the Musical reading, performing in a concert to benefit Choice One Pregnancy Care Center with Josh Young and Erin Mackey of the Broadway cast of Amazing Grace, the Musical. As a serving choir, SGM has been privileged to sing for many local nursing home facilities, at Barnes and Noble of Willow Grove, caroling in neighborhoods and at Peddler’s Village, singing to benefit local missions groups and performing annual benefit concerts for the Pregnancy Resource Clinic of North Penn. In 2018, a founding chorister, after earning her Bachelors in Piano Performance, returned as a director for two years. The Lord has greatly blessed SGM through the entire process of its formation and growth, with countless evidences of His providential guidance. He has provided for SGM’s needs through a variety of means – including the work of SGM parents, the generosity of audience members, the donation of risers, and a beautiful cargo trailer donated to store and haul the risers. All glory is given to Him for His hand of blessing! We continue to train, sing, and serve by His grace alone.